Buried in the ever-growing vault of conspiracy theories around COVID-19 is one about our beloved Zipper. This sculpture, along with three others from UCalgary's Nickle Galleries, has been on loan to the Esker Foundation, since just before the pandemic began. What would our world look like if the Zipper had remained outside our Science Theatres?, ponder the theorists. Although we can’t honestly call this a true virtual tour, here’s a video of what you’ll be able to see when the Esker reopens

If the video and these photos from the Esker feel weirdly familiar but not, it’s likely because you’ve seen several of the 100+ pieces that were, until very recently, on display but are now locked away.

Praying for a boost in marks, what student hasn’t spun the irresistible shiny Zipper (a seven-foot-tall good-luck talisman), just outside UCalgary’s Science Theatres? Or marvelled over Earth Probe in the Research Park, the Garden of Learning in Swann Mall or Conic Turn in the Schulich School of Engineering complex?

UCalgary's campus art collection and Nickle Galleries proudly own these four pieces by sculptor Katie Ohe, LLD’01, but, what many of us haven’t seen is the whimsy and engineering that went in to so many of this 84-year-old’s other pieces. Apart from the Esker gallery’s first three tables that display delicate maquettes and smallish sculptures that depict the beginning of Ohe’s fascination with movement and figures, most of the other pieces invite you to spin, touch and twirl the mind-flipping kinetic marvels that invoke wonder and, invariably, a good laugh.

Ohe, who taught art in this province for 48 years, was born in Peers, Alta., in 1937 and began her formal arts education in the 1950s at what is now the Alberta University of the Arts, then trained in Montreal, New York, Italy and Japan.

“Katie’s influence is vast,” explains Naomi Potter, one of the show’s three curators, “which might explain why we have experienced a larger audience for this exhibit (10,000+) than for any other in our eight years of operation. Because we had to cut short this exhibit’s run is why we are extending the exhibit until Sept. 6, hoping we reopen this summer.”

Spanning six light-drenched rooms at the Esker, Ohe’s sculptures are not arranged chronologically but, rather, are organized according to size, motion, playfulness and reflectiveness. 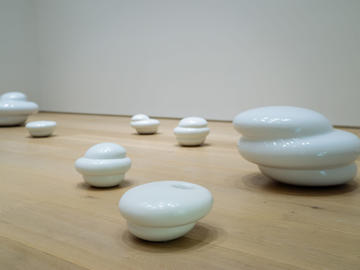 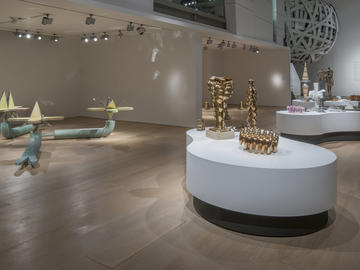 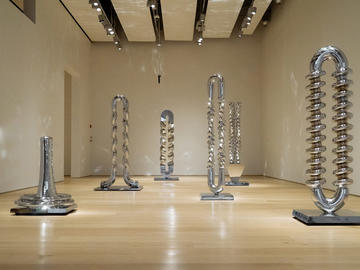 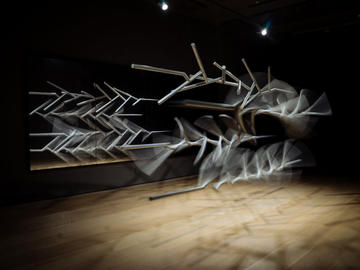 In a room dubbed The Chrome Forest is where you’ll find the beloved Zipper, shimmering and swirling just as it has on campus for decades. But the other five equally bold and stunning steel and chrome companions mean that the glittery wobble effect is breathtaking and conjures pure delight. If you’re wondering why all six chrome pieces are the same height, Potter explains that back in the ‘70s, when Ohe made these pieces, the artist was restricted by the length of the chrome bath (seven-feet long) used by the machinist she worked with.

Such are the gems Potter shares on this guided tour which you can also see in the video.

Ohe’s whimsical world continues with a series of conical shapes that sport hoops around their “bellies,” and appear grounded by little metal feet. One of these abstract sculptures is called Mrs. Squat Lady (on loan from the Nickle) while another is a playful Mr. Up. Stare at them for a spell and they do begin to look like chubby little creatures or, then again, perhaps they’re meant to be graceful mini-sized Japanese temples?

Other rooms contain a series of bell-capped springs, polished gear- or puzzle-like pieces that spin and cast dazzling shards of light and the immensely playful Monsoon — a series of pudgy round white sculptures that spin and wobble in mesmerizing patterns.

Wanting to provoke touch, “even before you think you shouldn’t,” says Potter, “was what Katie has always wanted,” adding that one of the octogenarian’s seminal moments that connects moving space with form occurred when she was four or five. “The story goes that Katie’s father was peeling a potato and somehow placed the spiral of the peeling on the stove which started to curl and move.”

While moments like the curl of a peel barely register with most of us, Ohe never forgot the beauty and mystery of that moment.

We are all hoping that when art galleries such as the Esker Foundation reopen you’ll find time to tour this playful and tactile exhibit. The Zipper and its other three companions will return to their rightful homes on campus later in September, after the exhibit closes.