Thinking Inside the Box

How many UCalgary alumni does it take to nab a slot on CBC's Dragons' Den? Turns out five, says alumna Jenelle Peterson, one of the founders behind WildLife, a subscription-box program that bundles up adventures for kids.

Our shopping patterns for food, beauty and wellness have changed so drastically in the past decade — and even more so due to the pandemic — that it almost seems laughable to think that, once upon a time, the only way to discover new products was by sampling them in a store.

Taking its place alongside online shopping and curbside pickup, the subscription-box trend is yet another shopping disruptor, one that’s been growing in popularity since the advent of Birchbox’s cosmetic sampler in 2010.

But none of these boxes — from companies such as Goodfood, FabFitFun and kids’ science kit-maker KiwiCo — have bundled up the great outdoors for children. That is, until last March when two siblings teamed up and planned to launch WildLife Outdoor Adventures at the Outdoor Adventure Trade Show that typically sweeps across Canada every spring.

“‘Pivot’ really is the word of the year, isn’t it?” laughs Jenelle Peterson, BComm’07, who ditched the zany trade-show booth they had just designed, rejigged their launch strategy, messaging and imagery, and began billing their efforts as “summer camp in a box,” in what seemed like a matter of hours.

But let’s back up: Long before WildLife Outdoor Adventures Ltd. became a boxed bit of wilderness, Peterson and her brother, Jeremy McDougall, BSc (Eng)’03, found themselves spit-balling ideas while lamenting childhood camp memories — often while out on a hike. As the siblings became young parents, they found themselves increasingly competing with on-demand technology that invariably would lead them to reminisce about a B.C. Parks program they had loved when they were kids called Jerry’s Rangers. A couple of years ago, Peterson and McDougall got serious and began booking space at the Calgary Public Library where they spent months scribbling ideas all over a whiteboard. “That’s when we decided the vehicle for our offering would be subscription boxes — we needed to get into the homes of Canadian families and inspire them to play outdoors like we did as kids in the ’80s,” says Peterson. 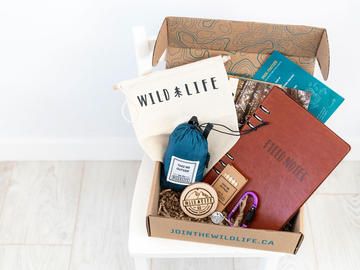 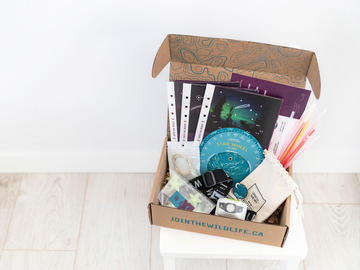 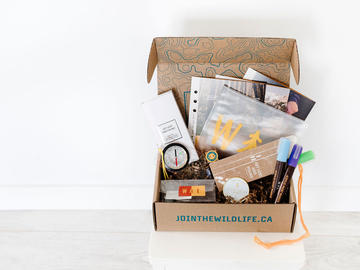 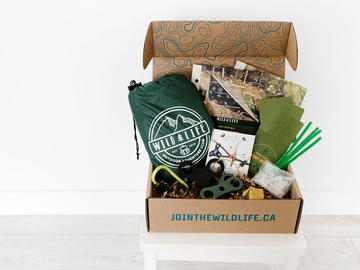 Unlike other subscription boxes that typically pre-sell a box and then the distributor procures items for a one-time booty of goodies, the WildLife team wanted to build a sequential program where each kit would build on the others.

The subscription boxes are designed for eight- to 12-year-olds

WildLife’s subscription program offers a three-, six- and 12-month box program with the six-month ($45/mo.) series being the most popular. Each kit, or box, reflects a theme and contains items like outdoor gear, toys, materials for a craft and a merit pin. For example, Kit 4 “Take Cover” is about shelters, Kit 8 “Cookout” is about water, food and nutrition in the outdoors and Kit 9 “Rain or Shine” is all about weather.

“Let’s say you’re on Kit No. 4 and you’re building an outdoor shelter . . . well, the instructions may refer you back to use gear you got in Kit No. 1, like a carabiner, that will now allow you to construct a shelter,” explains Peterson.

“The activity cards get all of us outside, as a family, learning together and doing new things."

“That’s certainly one of the aspects that I love about these kits,” says fan Natasha Dawson, whose two children have loved the fort-making kit and the first-aid box the most. “The activity cards get all of us outside, as a family, learning together and doing new things. And the products in the kits are not just cheaply made goods that will break after a use or two. These are quality items that will stand the test of childhood adventures.  The fact that these are monthly subscription kits are great as well . . . something exciting for the kids every month, and I don't have to think about it, they just get sent to us regularly.”

After conducting focus groups and surveys, Team WildLife knew that parents didn’t want another one-time, one-use project, precisely why customers are not compelled to buy all 12 kits, which are designed for eight- to 12-year-olds but can appeal to kids as young as six.

Sourcing the five or six items that appear in each kit, as well as designing the appropriate activity cards, are the two biggest challenges, says Peterson, explaining that 80 per cent of its products are custom manufactured overseas and the activity cards . . . “I bet between our team we easily spend 100 hours on each batch of cards and that’s per kit.”

With WildLife having just moved into a 2,000-sq.-ft.-warehouse off Horton Road in Calgary, Peterson says they’ve shipped more than 4,000 kits to some 765 customers across Canada this past year. And what is the company’s growth trajectory? “Forty-one per cent, month over month,” calculates Peterson. “I really do believe we’ll reach more than $2 million in revenue in the next five years. Right now, we are working with BDC [Business Development Bank] and Export Development Canada to build a plan to enter the U.S.

“We are dreaming big here . . . we see a future of new product lines for our existing demographics, plus retail offerings and more custom partnerships [WildLife just began a partnership with Explore Magazine].”

Watch for WildLife on Dragons Dens in its upcoming season

With COVID-19 forcing families to return to a simpler, slower pace of life, the timing of these kits is almost uncanny. On April 19 Peterson participated in the Total Mom Business Pitch where she honed her skills for her upcoming trip to Toronto where she'll film in front of the infamous CBC Dragons, having just discovered they made it to the next round of the Dragons’ Den 2021-22 season. Plus, Buchan is currently collaborating with UCalgary on a summer camp program that will focus on outdoor education.

So . . . what’s been the one crackerjack idea that’s sent this alumni-run company to the moon?

“Marketers like myself are always looking for the one idea,” admits Peterson. “But it’s never just one. Like my brother says . . . ‘subtle pressure, applied relentlessly.’”

From promotions in gift guides and Facebook ads to testimonials, coverage in the Huffington Post and on the CBC, as well as upcoming partnership with The Mustard Seeds’ CAMP FOR HOPE initiative and guest appearances on CTV and Global Calgary, and now a potential segment on Dragons' Den — Peterson says she often hears Haskayne assistant professor Dr. Derek Hassay’s words ricochet around her head.

“‘If you're not willing to hustle for your business, nobody else is,’” Peterson says, remembering what Hassay would say in her sales management class. “‘Inside every good marketer is an entrepreneur waiting to burst forth – be confident in your offering . . . and don’t be afraid to pick up the phone.’

“Oh, the cold calls I’ve made,” laughs the trailblazer, “but the local, and even the national, entrepreneurial ecosystem we have in Canada is .  . . surprisingly lovely. Everyone is so willing to help each other out. It’s very cool.