This Year, Choose a Different Kind of Resolution

Stick with us here — scrap the diets, the must-read book lists, your out-of-control predilections for binge-watching — and think bigger. Beyond yourself, suggests Tanya Talaga

Whether Tanya Talaga is on a book tour or the host of a prestigious CBC Massey Lecture (she was the headliner in 2018), she fields questions from her audiences. Among them, says the Toronto Star journalist, is always a query about what the average Canadian can do to help mend our shattered system between Canada’s Indigenous and non-Indigenous people.

“If every Canadian were to take one, just one, of the calls to action from the TRC (Truth and Reconciliation Commission) and apply them to their lives,” she suggests, from her home in Toronto, “that would make a huge difference.”

With 94 calls to action, your choices of a meaningful resolution for 2020 are ample. Or, if resolutions or setting new commitments are not your thing, simply join Talaga on Jan. 29 when the award-winning author of Seven Fallen Feathers and All Our Relations: Finding The Path Forward visits Calgary as part of UCalgary’s Indigenous Knowledge Public Lecture Series. Presented by ii’ taa’poh’to’p, UCalgary’s Indigenous Strategy, in partnership with Alumni Engagement, this is just one of many initiatives that aim to develop authentic relationships with Indigenous peoples and communities both on and off-campus.

Knowing that one aspect of reconciliation “is the collective journey that honours Indigenous peoples’ stories, knowledge, and traditions,” explains Pamela Beebe, UCalgary’s Indigenous Cultural Education and Protocol Specialist, “prompted us to launch a six-part annual lecture series as a step on our path that respects, includes, and promotes Indigenous ways of knowing, teaching, learning, and research.

“And we chose Tanya because she is very much on the front line, fighting for the rights of Indigenous people across Canada,” she adds, noting the names of other “warriors” on the upcoming 2020 UCalgary roster of speakers include Dr. Esther Tailfeathers, MD and Harold Johnson.

CBC Massey Lectures, All Our Relations: Finding the Path Forward

Making history as the first Indigenous woman to give the five-part CBC Massey Lecture series in 2018, Talaga’s sold-out talks examined the legacy of cultural genocide against Indigenous people. With a Polish father and an Anishinaabe mother, Talaga grew up in Toronto but spent summers in Raith (an hour northwest of Thunder Bay) where she would stay with her grandparents who were residential school survivors. Thunder Bay was also the setting of Seven Fallen Feathers which grew out of an article for the Toronto Star into a 376-page book — giving Talaga yet another reason for choosing to launch the lecture series in this oft-neglected northern Ontario town. Although the talks spanned Canada, the tour didn’t include Calgary — in fact, this will be Talaga’s first time to Calgary, making it an opportune time to meet the author/journalist/lecturer and leave more informed about our past.

Making a shift in how we view our splintered world is what Talaga does with ease, sharing her Indigenous perspective with the hats she wears as a newsmaker, a scholar, a mother.

Improving the status of Indigenous people is crucial to our collective surviving — and thriving. Just look at the staggering facts, adds Talaga, “the leading causes of death for First Nations youth and adults up to the age of 44 are self-inflicted injuries and suicide. Every year, one third of all deaths among Indigenous Canadian youth are by their own hands.

“No one in this country should be forced to live without basic human rights,” she stresses. “Everyone deserves a good start in life. No one should be born into communities without clean water or proper plumbing or to parents suffering from addictions or poverty or be forced to leave their communities to access health care or a better education.

“The tragedy of all this trauma is that it’s preventable,” she says, adding that although the road ahead to true equality is long and bumpy she believes that many Canadians are seeing a new path forward.

“One of the most positive changes I’ve seen is in our education system,” she says, encouraged by the inclusion of First Nations history in many public and high school curriculums, in nursing and history faculties at universities as well as in numerous journalism programs.

On this path forward, we all need to stand side by side, says Talaga.

Find out what that looks like on Jan. 29 at the Central Library from 6 - 8 p.m. Register today.

ii’ taa’poh’to’p, the University of Calgary’s Indigenous Strategy, is a commitment to deep evolutionary transformation by reimagining ways of knowing, doing, connecting and being. Walking parallel paths together, ‘in a good way,’ UCalgary is moving toward genuine reconciliation and Indigenization.

A journey toward reconciliation through dialogue 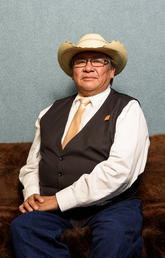